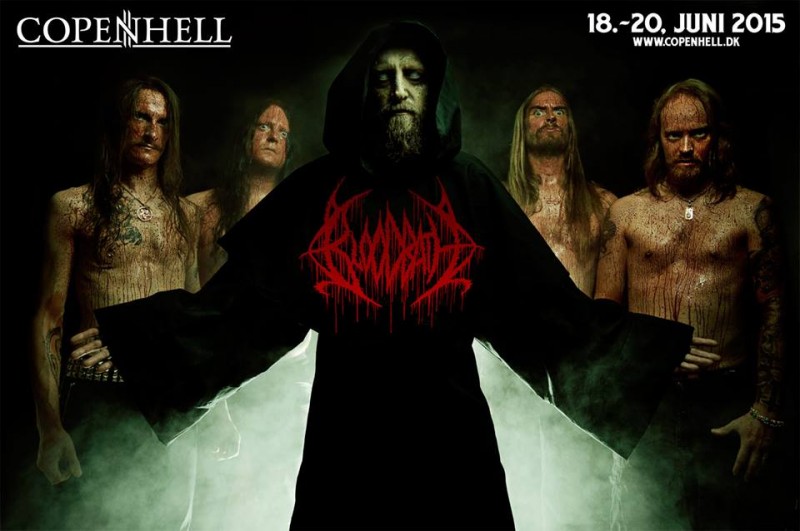 We take devillish pride in presenting the death metal band BLOODBATH, hot on the heels of their new album release, at COPENHELL 2015. The Swedish super group will create a true battlefield of a moshpit when we see you all in hell this Summer.

With new frontman Nick Holmes from PARADISE LOST and experienced musicians from top acts like KATATONIA and OPETH in the band, the Swedish death metal band BLOODBATH has been shining ever clearer on the dark metal sky since their debut EP Breeding Death in 1999. Their dirty, brutal sound harkens back to the late eighties golden age, mixed with loads of innovation, and through the last 15 years, these Swedish warriors have established themselves as absolute extreme metal frontrunners. With the release of their new album, Grand Morbid Funeral, by the end of 2014, this band is as burning hot as the flames of hell!

Bloodbath join a truely powerful list of bands that have already been confirmed for Copenhelll 2015. LIFE OF AGONY, THE SWORD, NUCLEAR ASSAULT, ASKING ALEXANDRIA, RAUNCHY, SOLBRUD and EXODUS all delivered the first blow in the stomach. They are just a small sample of the more than 40 exciting bands that will invite everyone to dance with the devil in the roaring moshpits at COPENHELL 2015. Many more hard-hitting bands will be announced soon – see COPENHELL.dk for more information.

Metal and hard rock combine into a wild primordial force, and COPENHELL lets the audience go all-in and experience an awesome music party of international standard in a safe environment. Everybody is welcome – no matter if you prefer evil black metal, if you want to thrash around in the pits or play the air guitar while listening to killer solos – and enjoying loads of great Danish draft beer, of course..

We are looking forward to seeing all of you at COPENHELL 2015!

The price of a full festival ticket for all three days at COPENHELL 2015 remains unchanged at DKK 1,070. As a new initiative in 2015 a limited amount of one-day tickets will also be sold, giving more music fans the opportunity to enjoy real culture with the very best festival in Copenhagen. The price? DKK 666, of course – according to the underworld, that is one hell of an offer!

Ticket sales start at 10:00 Danish time on Friday, November 24 through Billetnet.dk – be quick or be dead!

Two camping options will be available at COPENHELL 2015: Overnight stays in pre-placed COPENHELL tents or tickets with a tent area for putting up your own tent at the festival.

COPENHELL is a 3-day metal and hard rock music festival in the centre of Copenhagen, Denmark. Three great scenes at an old shipyard accommodate more than 40 bands from different genres in proper surroundings – and with lots of Scandinavian hospitality!