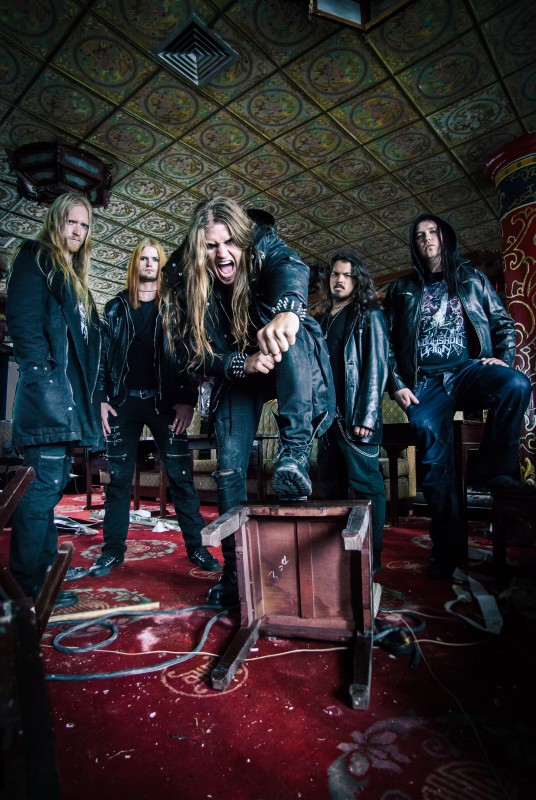 The story of melodic death metallers Deals Death began in a music college called Boomtown, where guitarist Erik Jacobson met a couple of other students. With some twisty bits in the story later, with which we need not bother, the band released their  self-financed debut ”Internal Demons” in 2009 to raving reviews.

In 2009 Deals Death recruited new members in Gothenburg and based there to stay. The second album, ”Elite”, was recorded in May 2010 in Gothenburg and mixed by Jonas Kjellgren (Scar Symmetry). “Elite” became their label debut and was released in March of 2012 via Finland’s metal powerhouse Spinefarm Records. A promo video was shot for the song “Fortified” and released in April 2011. The clip made some waves on the metal scene (surpassing already half a million views) and then, a fortuitous bounce launched Deals Death to a larger than just metal audience, when vocalist Olle Ekman’s “Death Metal Vocal Exercises” video became a surprise YouTube hit.

Now, after five years of hard work and dedication, Deals Death has earned their name in the world of metal with tours in Sweden, Finland, Japan and the UK, sharing stages with bands such as Scar Symmetry, Hypocrisy and Dark Tranquillity and making appearances at numerous festivals such as House Of Metal, Rockstad Falun & Sweden Rock; Deals Death have just started to reveal the tip of the iceberg to their potential.

The new album was forged in the deep woods of Grangärde, Sweden and here is the band`s statement of the record:

The world isn’t going to end, it’s only becoming a horrific and gruesome place to inhabit.

On September 13th Deals Death will give you the details of this event as we release our third album on Universal/Spinefarm.

Follow this step-by-step description of the process which breaks down the systems of nature and society.

This album contains 11 songs packed with a lyrical edge, delivered with all our blood, sweat and toil!

Having introduced themselves to a wider audience with last year’s “Elite”, the new album “Point Zero Solution” shows Deals Death’s staying power and musical evolution with lush arrangements, deadlier output through and through and melodic hooks catchier than ever before.