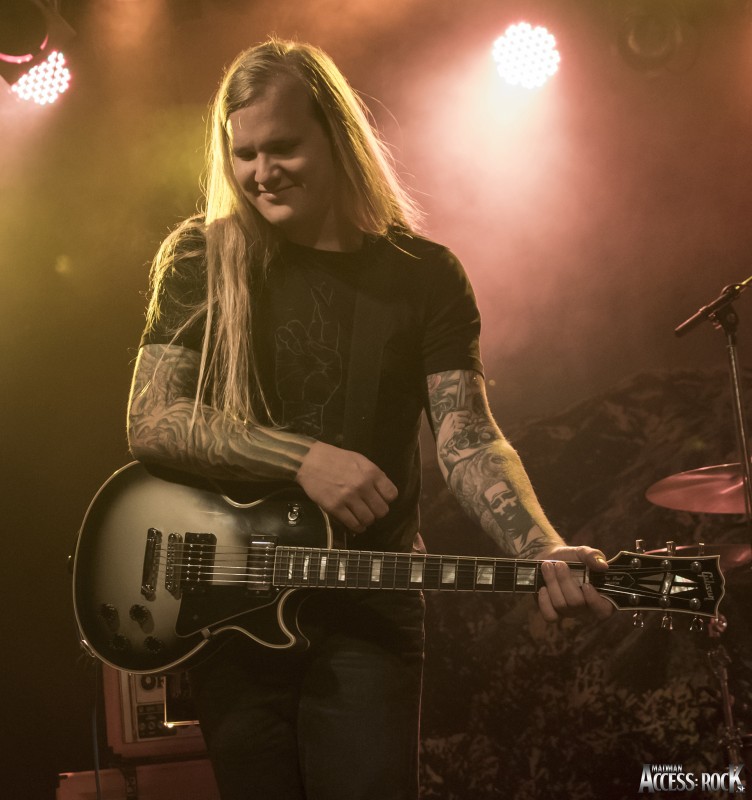 Access: Rock’s Madman had a word with Kyle Shutt (guitarist) from The Sword before their gig at KB in Malmö – Sweden. They talked about their new album High Country, which was released August 21st, fan reactions and Justin Bieber.

AR: How are you?
KS: I’m good, how are you?
AR: I’m fine, except that it’s pouring outside. Welcome to the Swedish summer, two or three sunny days and the rest are raining.
KS: Right now at home it’s about 40 degrees so this is like a paradise right now. We’ve been through Norway and Finland too and it’s been beautiful weather all the way. This is the first day it’s been raining, but I’ll take it.
AR: Have you been out sightseeing today here in Malmö?
KS: Yeah, we were earlier and just kind of walked around the city. We saw the old club where we played a couple of years ago, Debaser.

AR: Please introduce yourself to the Swedes who don’t know who The Sword is.
KS: My name is Kyle and I play guitar in The Sword. We’ve come a long way since we started. We are a lot different today than when we started, we are just four guys playing music, for the art.
AR: Not for the money?
KS: Of course, we have to make a living. It takes up so much of our time and we have to be paid for that. We are not rolling in money or anything. Maybe one day (laughter).

AR: You just released your new album High Country and I have to say that it sounds a little different from your previous records. How come you changed musical direction?
KS: People have always not been happy with the albums we’ve put out. Every time a new album comes out they always say that it’s different, which is funny because it’s seems like the same old thing to me. But of course it’s different, we keep going and keep writing songs. High Country doesn’t feel like a change for me, that we suddenly started going in a different direction.
We’re still the same musicians writing more songs and the more we write the more different they are going to sound cause writing the same song over and over would be boring. We are artists and we create what we want.
You’re not going to please everyone all the time, we do what we want and people seem to dig that. People act like we’ve erased everything we did before just because we try something new. If you don’t want to hear it, don’t listen to it.
AR: I’ve read some comments on your Facebook page and on YouTube how some listeners aren’t happy with High Country, that it’s not the same The Sword they fell in love with.
KS: Yeah we are the same. People have all kind of complaints, like it’s not heavy enough. I mean, did you turn it up? It’s really fucking heavy. People like to complain, it’s just a thing.
AR: And if they don’t like your new album they could always come to your gigs and listen to the old stuff.
KS: Yeah, and if they still don’t like it they can leave and make more room for the people who came here to party. You can’t always live up to people’s expectations and what they want you to be.
It’s been a really polarizing record, people really love it or really hate it. The ones who really hate it won’t shut up about it so it’s like free press. And in six months from now they are going to realise that it’s an awesome record and that they are being childish. Maybe it will force some of our immature fans to grow up (laughter).

AR: What were your musical inspirations for High Country? Did you listen to some specific music or something like that?
KS: I don’t really listen to much music anymore. I’ve listened to thousands of records over the years, thousands of hours just devouring it and being on tour all the time you hear so much music every day. I usually get more inspiration from reading books and it’s very quiet. I also get inspiration from art, my friends and the company that I keep. There’s already so much music inside me so when it comes out it’s a lot more honest than listening to a bunch of records and sounding like this and that.

AR: I realise that you use heavier synthesizers than on the previous albums, how come?
KS: We’ve always used synthesizer. It didn’t really seem like a new thing, on our last record we had a tons of them. People keep asking us why we’re using synthesizers, which is strange cause we’ve always used them.
Jay Robins who mixed our last album also mixed this and it just sounded natural, maybe the synthesizers just are louder on this album.

AR: You’ve been around for like a decade now, how has The Sword changed your life?
KS: Yeah, it’s crazy. We started out when I was twenty years old and now I’m thirty two. It’s a bit weird and it absolutely changed my life. It has forced me to learn how to run an international business and balance a bunch of relationships, it’s been like growing up on the road. It was a slippery slope but I’m here and we’ve put out a great album so I must have been doing something great.
AR: Could you see yourself doing this for another decade?
KS: Yeah, I’d like to think that but music business is changing rapidly every year with the digital music and everything so you just have to learn to adapt to it. Or you’re going extinct which I think a lot of bands are doing really soon.
AR: Maybe you should go for a new direction and make a pop album next?
KS: (Laughter) Next one will be a country album, that’s huge.
AR: Maybe a duet with Justin Bieber?
KS: Exactly. He won’t return my calls yet, but I have a feeling that any day now he’s gonna wise up (laughter).

AR: Do you have anything you’d like to add?
KS: It’s great to be back in Sweden, this is our last night here and we are excited to play the show.

Be sure to check out The Sword when they come to a town near you.

Photos from the gig can be found HERE.