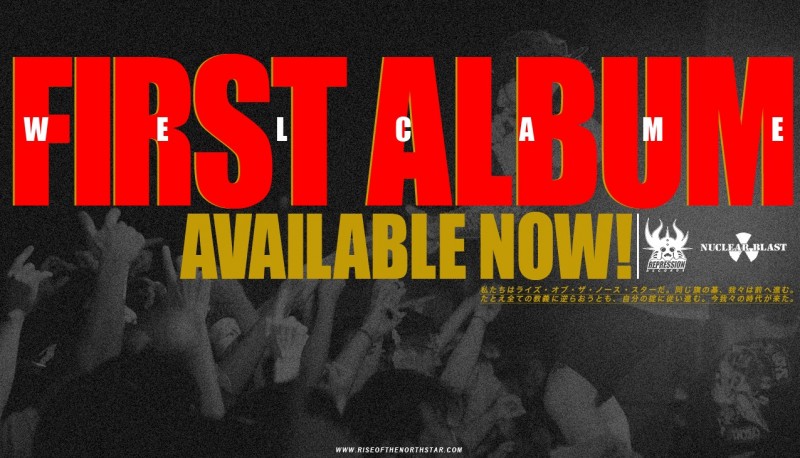 Rise Of The Northstar stirred up things in 2014 so we had to check in on them to see how things are!

Dave: Exactly where are you right now and what are you doing, (besides answering a mail-interview from Sweden’s Access: Rock)?

FF: If you had taken the trip to ask this question you would see by yourself haha! (Dave is kind of bummed out about not being flown in for a interview!)

Dave: Have you instagramed your food today?

Dave: ROTN did recently share the same stage as Machine Head in Europe! How cool was that?

FF: That was great. We got good response from Machine Head fans who were there and this is what we were there for. To federate. Robb Flynn seems to have enjoyed the show as well, he even congratulated Vithia when we finished our set.

Dave: How is Vithia doing?

FF: He is slowly recovering from his back injury. He’s much better then he was a couple of months ago, but it’s a long process, moreover because we’re still promoting the release of WELCAME and it drains a lot of energy out of him.

Dave: The first time I listened to Rise Of The Northstar I had only quickly looked through the description and was a bit surprised when I heard some old Cypress Hill in the middle of what I thought was ”thrash”. Then I read the description of your music and understood the Hill-thing but I’m still wondering how you came up with this sound?

FF: The golden age of Hip Hop is part of our influences so this is something that came up naturally. Besides what you read, we do not claim one particular style or scene, so this allowed us to put this «hill-thingy» in the title track of the record.

Dave: How would you describe your band and the sound?

FF: We are ROTNS. We move forward. With our own codes, facing all dogmas, united under the same banner, here comes our era. Moving forward with this mix of the 90’s influences : hip hop, NYHC, crossover, metal.

Dave: Could one explain ”The Furyo Style”?

FF: “Furyo” is a word to describe young deliquents in Japan: they are dunces, they fight, do random shits… If you open a Shonen manga that features furyos, you’ll notice it’s more than that. It’s about standing against adults’ world and established rules. Furyos live by their own codes instead of following common conventions. This is totally us and shit man, looks like I’m answering to the previous question again. Haha!

Dave: Why did you decide to name your record ”Welcame”?

FF: One of our biggest influences is a manga titled ”ROOKIES” (Masanori Morita), it portrays the life of Furyos who find salvation through baseball thanks to some kind of crazy teacher. At the beginning of the story, one of the characters throws a baseball at this teacher’s face and he wrote ”WELCAME” on it… Because he sucks at English and it’s his way of ”greeting” his new teacher. It really symbolizes what this album is: a muscled and atypical introduction. It’s also a way of showing that we 100% live with the fact that we’re not well spoken Anglo-Saxons, we were all dunces, deal with it.

Dave: On the 19th of november your debut album, Welcame, was released in Sweden. Even though you are already touring Europe we have to ask how you feel about releasing your debut album, nervous, exited, relieved?

FF: We’re all excited, we know this is only the beginning of the game. It’s our first album you know, we fully have faith in it and I can’t wait to hit stages across the world and play those tracks. Even if we are a young band, WELCAME is the result of a whole scholarship being a dunce, the result of the music and of the Japanese subculture that has paced our youth, all put onto paper and into music. We’ll defend it with all our heart.

Dave: Reading your Facebook-page it says ”Tokyo hold on tight, Rise Of The Northstar is coming.” and it looks like thing have gotten ”a bit” bigger than that already, did you expect this?

FF: It’s great to see how things are getting since we’ve worked very hard for that. We’ll keep on with the hard work to get even bigger!

Dave: Do you find it easy to recreate the music for the album live?

FF: Live shows are the best part of this job. Nothing seems difficult to me when it comes to play shows! Haha!

Dave: Where do you personally get your musical influences from?

FF: We all have different musical backgrounds, but on a personal basis my main influences are oldschool and youthcrew hardcore with bands like Down To Nothing, Go It Alone, Comeback Kid, Internal Affairs… And of course RATM, Slayer, Downset remain great classics.