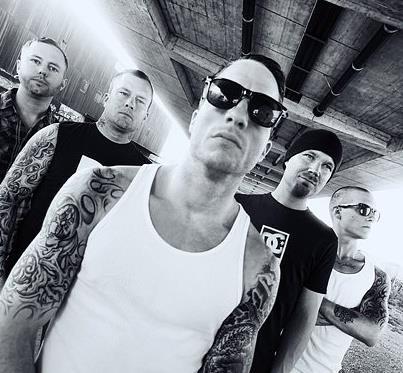 ”The upcoming album seems to become the best thing we’ve ever done, we really have something fantastic on its way. We realized we needed these 4-5 years away from writing in order to get the spontaneous vibe back into our music. Not to mention the cravings for live shows. Coming from the North Arctic Circle we’ve been perfectly isolated from every hype, selfies, diets, trendy breakdowns and other shit, in order to write our best album.

Raised Fists’ last release was in 2009. Between that time and today, lots of things have happened. For example, social media like Facebook/Twitter/Instagram was not on our radar, and never became anything we worked with during the whole last album cycle (Veil Of Ignorance). Therefore we have some serious catching up to do, which is why we will start documenting massively as early as in the studio. We owe this to all our friends, who waited this long.

This time it’s also time for changes regarding choice of producer. There is only one other person in Europe that we could imagine working with outside DugOut Studios and longtime friend Daniel Bergstrand. That man is Roberto Lahgi from Gothenburg. We believe he is the man that can bring an extra edge and roughness to this upcoming album. We are super excited about the recording process, which is always a good sign!

Our fans know us and they feel safe and comfortable with our releases.

They know we will never let them down or embarrass them by releasing a shit album with no soul. That is just not RF. We could not travel from the north, to play songs we could not stand behind. We stand solid!”