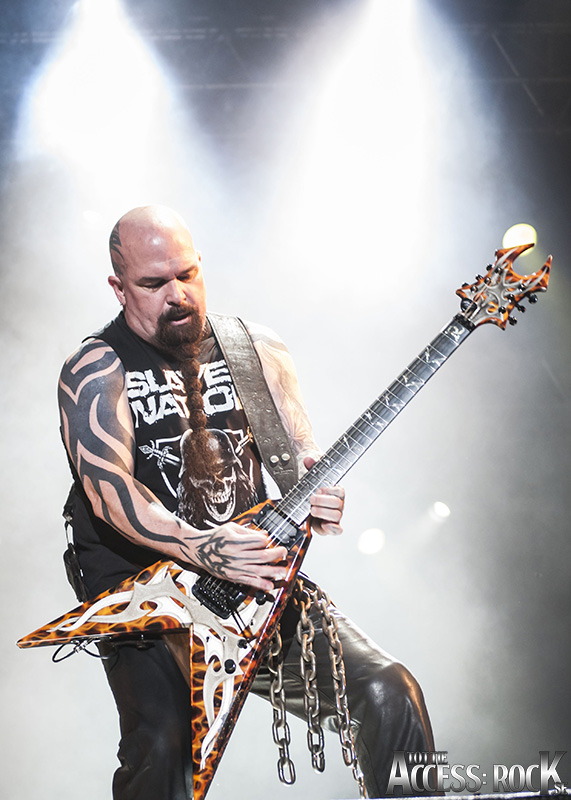 Bandets gitarrist Kerry King kommenterar albumet: ”There’s a couple of songs that are going to be on it that the fans might know. Atrocity Vendor was released in the States on the B-side of some single [a limited vinyl edition of World Painted Blood], so now it’s Atrocity Vendor 2015. It’s completely re-recorded. It’s got new leads, new vocals, Paul playing drums … it’s pretty cool. There’s a brand new version of Implode [which was recorded in 2014 and given away for free] on there. The version of When The Stillness Comes is brand new compared to the single [that came] out [for last month’s Record Store Day].

”The first song is called Repentless and that one’s pretty much… I call it the Hannemanthem! I wrote that for [late Slayer guitarist] Jeff [Hanneman]. Oh, dude, it’s fast as fuck. You don’t know what the fuck’s coming! [Laughs] A song called Vices is on there somewhere. It’s super heavy. It’ll pummel you in the face. Take Control’s another fast one. Cast The First Stone’s another heavy one.

”There’s 12 songs on it, one being the intro, one being Implode, one being Atrocity Vendor and one being When The Stillness Comes, but every version of those songs you may have heard before is different, so I think that’s cool, but I also wanted them to be part of a collection. I like the finality of songs belonging on a record. It’s probably about 40 or 45 minutes, maybe less. We did God Hates Us All and we put every song we had at the time on the record because that was the trendy thing to do, but as soon as we did that, I vowed never to do it again. I grew up with 10-song albums.”