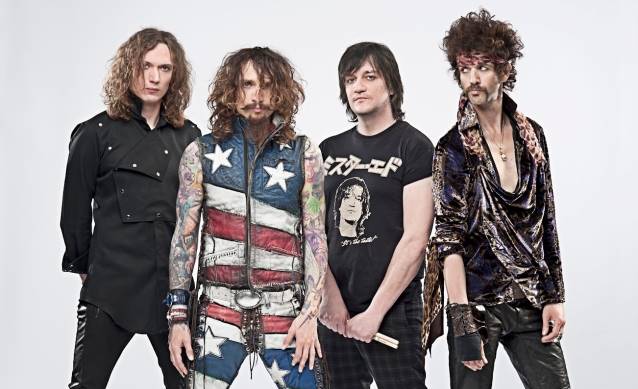 The Darkness äntrar studion under augusti/september månad för att spela in sitt nya album, som följer upp Hot Cakes från 2012. Albumet beräknas släppas tidigt 2015, bandets frontman Justin Hawkins kommenterar, ”We’ve been writing it on a remote island just off the coast of Ireland. It’s been a really inspirational place to work and a real luxury to be able to do that. It’s a great place to write songs. There’s really nothing to do but rock out and enjoy the scenery and the Atlantic. We have loads of super-strong material.”

Gitarristen Dan Hawkins tillägger: ”We’ve put a lot of work into the pre-production on this one. There’s an album pretty much already recorded, but in demo form. We’re even talking about recording it in Kerry [Ireland] too. I can’t tell you what sort of effect the place has had on us. It’s just triggered some of these medieval, Led Zep-style riffs that we’ve been missing for a while.

”I was reading something about [Led Zeppelin] and Jimmy Page was talking about how bands went out to make very eclectic albums in the ’60s and ’70s. Whereas these days bands tend to think, ’What would our fan base expect us to do?’ and stay within those parameters. And I think we’ve been guilty of that with the last record. So this one is more like an experimentation in rock. It’s similar to what we did on the first record [2003’s Permission To Land], where there was every different type of rock song on there.”