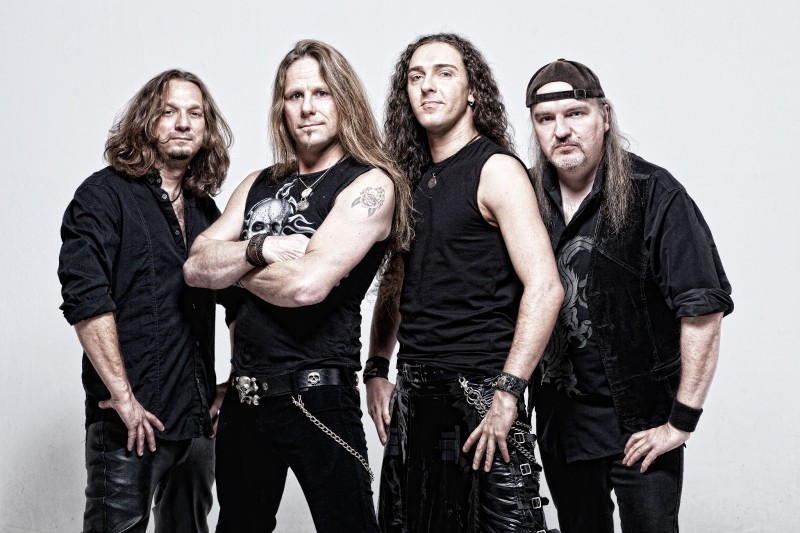 Chris Bay, singer and guitarist of Freedom Call was kind enough to give me a couple of minutes of his time for an interview.

We talked about their new greatest hits album Ages of Light, the tour and a new studio album.
Access: Rock’s words are in bold.

You just released your greatest hits album, Ages of Light. How did you come up with this idea and how did you pick the songs for it?

(Laughter) Greatest hits sounds great. I think it’s just a collection of songs we’ve did and we have seven albums. The idea came from my record label, they told me last year that this year is our 15th anniversary and I said, ”What? 15 years? I can’t believe it.” It’s such a long time and I noticed that the time is flying away and it’s been 15 years since our debut (Stairway To Fairyland). For me it feels like an honor from my record label to give us this the best of album.
The music and the songs already exists on the regular albums and we got the idea to collect as many songs as possible to release another album called Masqueraded (second album of Ages of Light), just so our fans won’t get bored.

I’m really fascinated about Masqueraded, what made you do different versions of your previous songs?

I did it just for fun and for my friends, just to show that you can stretch and make a song into different directions and then the idea was growing and it seemed like a good idea to give our fans some bonus songs and not just recordings from the practice room. I got the support from my record company and we did the songs in different styles like Mr. Evil as reggae, but it’s regular productions and we had so much fun doing it.

Yeah, cause about a month ago you released a video for Rocking Radio in a Killerbilly version, how was the fan reaction for that video?

At first I was not that scared or afraid that metal fans would hate us for releasing a song like this but I was not totally convinced that people would love it. Now I’m happy with it and got nice response from the fans so you could say that we have one of the most open minded fans in the metal scene. I can’t imagine what happened if Slayer would play raggae songs or ska or whatever (laughter).

Will you release more songs like the ones on Masqueraded?

No, I told everybody that we wont continue in that direction so no one has to be scared that the next Freedom Call album will be a swing album (laughter).

Let’s go back to Ages of Light, did you have full control over which songs that would be on it or did the label wanted you to have specific songs?

That was an incoperation, I sent a list to my label with some ideas and then I got some opinion from friends of mine and the record label cause they have to promote it and sell it so it’s better if they are happy. It was a very quick thing and I started with the first album and so on, it was easy to find the right songs cause I took songs we’ve played live on stage. It’s like a journey of all the ages of Freedom Call.

Cause I’ve heard a lot of bands for example Ozzy Osbourne who doesnt want to do an greatest hits album cause he doesn’t have any saying about the songs on the album, it’s all up to the record label.

Yeah, I think that he’s not totally wrong with his opinion cause why release the same songs twice when the people can do their own compilation. But when it comes to a band in our stages I think it’s quite different to Ozzy Osbourne (laughter), it’s a chance for us to promote us and show the people that we’re still alive and going on a tour again so it’s a big honor.

What can you tell us about the album artwork for Ages of Light? If I’m not mistaken it contains all of your previous artworks, was that your main idea?

Yeah, I think it’s a solid base including all the albums of Freedom Call, it’s like a sign or a seal that will remind us and hopefully in 15 years we will get a new one.

(Laughter) Let’s hope so. Ok, so you’re currently on your Ages of Light Tour, how is it going so far?

The first shows was brilliant. I do not see this tour as a regular tour with a new studio album, It’s made for our 15th anniversary so we are playing a more different setlist and it’s running great. We started in Germany, Italy, France and again we noticed that we have great fans and what I tould you earlier they are very open minded which is good cause it’s a special tour and a special album.

We are including a couple of songs from Masqueraded and we don’t have the focus on playing the best songs, we do good performances but we don’t take ourselves to serious especially on this tour and this is going very very well, we are really enjoying ourselves.

So, after this tour will you start recording a new studio album or take a break?

Oh yes, I’m already very busy writing new songs and I have to catch all the short brakes between the shows we’re playing this year and I have to use every free minute to write new songs. I’m already around five songs and the other guys hopefully have something too. We plan to go into the studio in September and release a new album early next year.

Have you decided any title yet?

Can you say anything about the theme of the album or that’s confidential?

(Laughter) That’s very confidential but I think there are too many ideas and they are different so I don’t want to tell you some wrong things. Then I would tell you next year that you’re a liar (laughter).

And we wouldn’t want that (laughter).
Chris, are you the main writer in the band? Are you the boss or is it more like a democracy?

Democracy, no no, I’m the boss (laugther). Well, I’m the last warrior of the first line up so I keep the flame burning but I don’t see myself as the boss. We are a democracy and all the band members have a chance to bring new material to the table and it’s all discussed among us. So I would say it’s an democratic dictation where I have the last word.

What’s your inspiration to create new music? Where do you get it from?

From life, I do not read special kinds of books about fantasy or dragons. I think it’s the interesting life we live, the luxury of a musician to live from the money and live our happy life. There’s a lot of experience that you can bring into the lyrics and music and I think that is a connection between some elements which makes it possible to get new ideas for songs.

As you said before, it’s been 15 years rocking now, how has this life changed you except being world wide famous?

I think I’m getting a little bit more serious, the main thing is that I have to work more and more but I don’t get more money for that which is ok. Music isn’t only my hobby, it’s also my passion and my best friend so I have no problem in the change of market, less selling rates. I’m fine, I don’t have to be hungry, I can have a small car and a flat and the most important thing is that I can do what I want.

Do you think it’s because of file sharing that you don’t sell as many records?

Yes, that is the first reason to say that Internet is guilty of the music business going down. I think that on the one side it’s easier to get music when you download it for free, on the other side you can use Internet very well for your own interest and do promotion for free. With Internet I can introduce the band world wide without paying thousands of dollars to have some advertisments in magazines or radio stations.

I get the impression that you’re a very busy man Chris, do you ever find some free time for yourself?

Nowadays it’s pretty hard work cause I wan’t to finish the new album this year but usually I can find enough time. I have an motor bike and like to go out of the city, I’m doing sports and I like to travel around but this year I’m to busy so no motor bike and no traveling.

That was my last question Chris, do you have anything you’d like to add?

Yes, especielly to Sweden. We always enjoy playing in Sweden. I think Sweden was one of the first countries we played in and we only have good memories. Next week we have this long travel, going by buss and first show is in Gothenburg and I can’t wait to be on stage, hopefully there will be a lot of Swedish metal heads with us.

Thank you Chris for taking your time and good luck with the rest of the tour.

You can buy Ages of Light via iTunes.