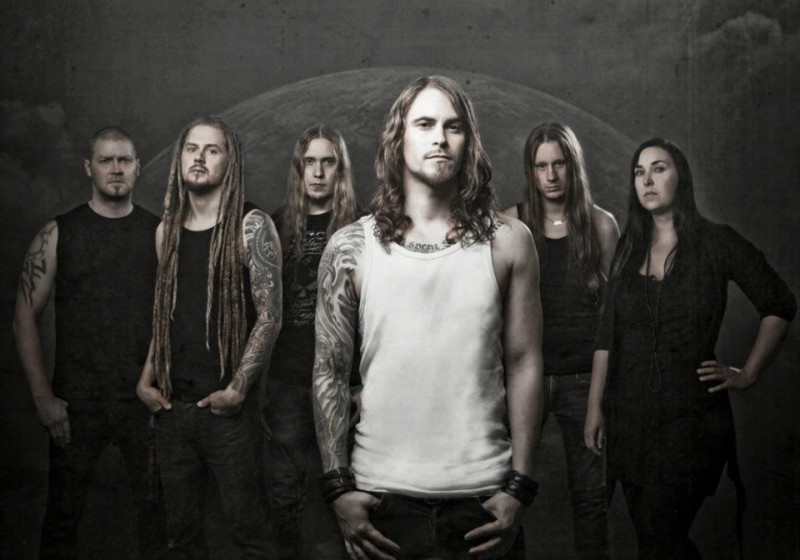 Resistor (guitar) and Eve (Keyboard) of MyGrain from mighty Finland was kind enough to give us a couple of minutes of their time for an interview.
Access: Rock’s words are in bold.

First of all, who are you guys? Where are you from and what kind of music do you play?

Resistor: Hello. We are a metal band from mighty Finland and we are called MyGrain. The influences comes from Scandinavian metal with a mixture of American metal I guess. Lots of catchy melodies and ass kicking riffs!
The band was formed in 2004 and we have currently recorded 4 albums. We have been touring around Finland for ages and
also visited Europe and Japan.

Eve: We’re keeping the choruses awesome and catchy and anything could happen in between… It usually takes more than just a couple of listens to find the essence but we promise that patience will reward you! We’re against disposable music.

You released your 4th studio album, Planetary Breathing, about a week ago. How has the fan reactions been so far?

Resistor: Mostly really good. We are really happy with the results and we are anxious to play the new songs for our fans.

Eve: The fans seem to like it and that is the best prize you could get after the long wait for the album release. The reviews have been polarized – some love it and some hate it. That is also the best feedback you could get, since mediocrity is boring. We will continue to write songs that have a lot of elements and evoke opinions in people. The biggest surprise with this album seems to be the slower songs which we thought needed to be written. We think the changing tempo adds some colour to the album.

What difference is there between Planetary Breathing and your previous records?

Resistor: I think we have taken a step forward with every album we have made. I think we just continued where we left with the S/T album. We tried to make the package a little bit more tighter this time. There are more mid tempo songs on Planetary Breathing.

Eve: There isn’t that much stuff happening at the same time, although the songs consist of very different parts. Again we have progressive parts, catchy choruses and a lot of details in the songs but everyone isn’t showing off all the time. Working like this, we pursued to give some space for the riffs and beautiful melodies.

What can you tell us about the album artwork? I find it very simple, a planet with some kind of ”sun rise” and strange figures towards the planet. What’s the deeper meaning?

Resistor: We’ll if you know the band, we have always had this little ”space theme” on our album covers and in lyrics as well.
Our friends from Pietarsaari (Darkartphotography.com) made the cover. Pretty cool I think! Big thank you goes to Fredi, Bau and Natte.

Eve: The characters walking towards the planet are actually the band members.

Once again your worked with Janne Saksa at Sound Supreme studio and Dan Swanö who mixed and mastered the record. How was it to work with these guys again?

Resistor: It was an really easy and relaxing process. We have now recorded 3 albums with Janne so things went really smoothly. Sound Supreme Studios is a great place to record an album and we really enjoyed to work with Janne again. Also Dan is a master on what he is doing so the mixing/mastering process was also pretty easy. And like I said, we think it sounds killer!

Eve: Going back to Sound Supreme Studios was like returning home for us. A lot of good memories have taken place inside those walls. Janne is indeed a great person to work with when it comes to recording. He is so calm that you don’t get nervous at all while recording and he basically never gets nervous. Our chemistry fits together perfectly.

Who is the main writer in the band? Are you a democracy or is there a leader?

Resistor: Usually it starts with guitars and drums. Jamming in the rehearsal room but all of us is a big part of making
the music. Everyone puts their own spices to the soup so there is no main writer or anything like that…

Eve: Yep – I could add that the guitarists in our band are the most productive ones. Some of the songs have been created around a keyboard riff, bass line or a drum beat as well. Tommy is naturally responsible for all the vocals and lyrics. But as Resistor already stated, the songwriting process is very democratic and we have created the songs together at the rehearsal place. Things are changing though. Every one of us has so many other responsibilities nowadays that we can’t attend the rehearsals that often anymore so we have drifted towards the modern songwriting style: sending riffs via email. The final arrangements will still happen at the rehearsal place. It is exciting to see what kind of songs will be created this way, when it comes to the fifth album some day.

So, how are you planning on promoting Planetary Breathing? Are you going on an tour across Europe, will we see you in Sweden?
Any festivals next year?

Resistor: Hopefully we get to play live as much as we can. Europe would be a nice place to visit again…
Japan, U.S. …everywhere basically. If you book us, we’ll come!

Eve: We have never visited Sweden, that would be great. You have a lot of great metal bands there!

Resistor: Thank you for the interview and hopefully we see many MyGrain friends on the road! Rock on!

Eve: Give your local promoter a word of us and we’ll finally get to play in Sweden!